I'd pretty much given up on finding a good image of this old issue of Punk Magazine which features this comic about Feminazis or something like that until it popped up on this blog Mundo Bocado (which i was turned onto by Monster Brains blog), in Spanish, no less. I had no idea Punk was being translated into Spanish. That's crazy! 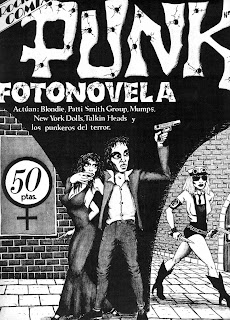 The original version had a swastika where it says "50 pesetas" there.
Read the whole thing at the excellent Mundo Bocado.
Posted by SEAN at 8:09 AM 1 comment: 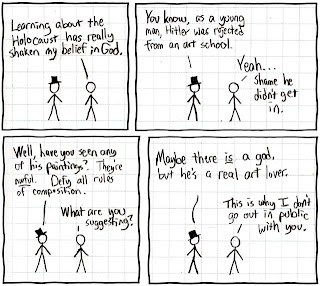 Posted by Katie Aaberg at 9:45 AM No comments:

Email ThisBlogThis!Share to TwitterShare to FacebookShare to Pinterest
Labels: hitler in the comics, webcomics, xkcd

“The meatgrinder has become operational.”

This cartoon appeared on March 17, 1933 in the Leningradskaya Prawda. The Russian caption, when translated from German, reads, “The meatgrinder has become operational.
Posted by SEAN at 11:54 PM No comments: 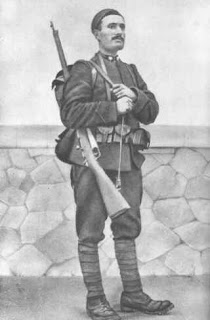 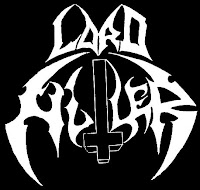 Observe Polish Black/Death Metal band "Lord Hitler". They released one rehearsal tape in 1991. That is all i can find befor i go to bed about Lord Hitler. No, wait. The vocalist of the band, Piotr Piasecki also wrote a zine called Infernal Death. 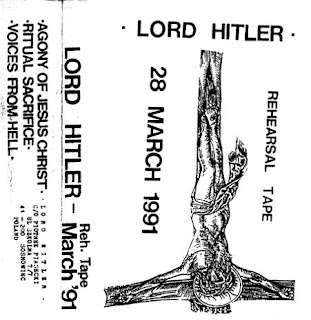 Download their demo/rehearsal tape over at the Darkside Music.
Posted by SEAN at 12:54 PM No comments:

Sales of Mein Kampf, Adolf Hitler's autobiography and apologia for his anti-semitism, are soaring in India where business students regard the dictator as a management guru. By Monty Munford in New Delhi for the London Telegraph. (if i had a name like Monty Munfod, i'd be a reporter too!) 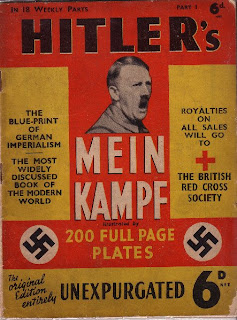 Booksellers told The Daily Telegraph that while it is regarded in most countries as a 'Nazi Bible', in India it is considered a management guide in the mould of Spencer Johnson's "Who Moved My Cheese". Sales of the book over the last six months topped 10,000 in New Delhi alone, according to leading stores, who said it appeared to be becoming more popular with every year. Several said the surge in sales was due to demand from students who see it as a self-improvement and management strategy guide for aspiring business leaders, and who were happy to cite it as an inspiration.
"Students are increasingly coming in asking for it and we're happy to sell it to them," said Sohin Lakhani, owner of Mumbai-based Embassy books who reprints Mein Kampf every quarter and shrugs off any moral issues in publishing the book.
"They see it as a kind of success story where one man can have a vision, work out a plan on how to implement it and then successfully complete it".

Read the whole thing HERE.
Posted by SEAN at 8:43 AM No comments:

Hitler at the Munich-Salzburg autobahn 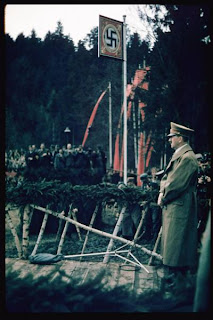 Hitler speaking at cornerstone laying, Munich-Salzburg autobahn during the Austrian election campaign. Photo by Hugo Jaeger for LIFE.
Posted by Katie Aaberg at 8:09 PM No comments:

“Swastika” To Show In Germany After 36 Year Ban 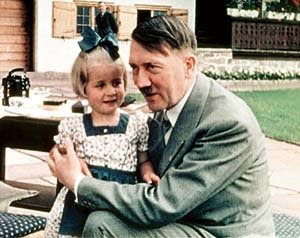 “Swastika” To Show In Germany After 36 Year Ban
Monday, April 20, 2009 – By WeHo News Staff, West Hollywood
West Hollywood, California (Monday, April 20, 2009) - WeHo documentary film maker Philippe Mora and Lutz Becker's 1973 documentary about how Nazis infiltrated German lives was banned from showing in Germany after fights broke out at its first showing, in Cannes. Adolf Hitler’s image playing with children caused a near riot at its first showing in Cannes. WeHo News. 36 years later, it will premiere at the Biberach Film Festival in October, followed by a screening in Berlin... Mr. Mora told WeHo News, "The film was made to show that Hitler was a human being. “If we don't recognize that fact, we won’t see the next monster coming."
Read the rest here!
Posted by SEAN at 2:03 PM No comments:

Hitler addresses German officers after the occupation of Danzig 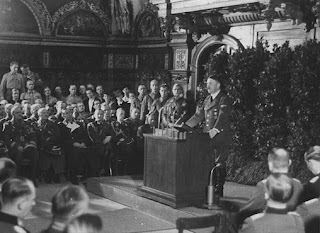 Posted by Katie Aaberg at 6:50 PM No comments: 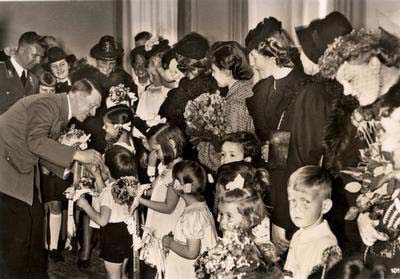 Children greet Hitler on his Birthday, not sure of the year.
Posted by SEAN at 2:22 PM No comments: 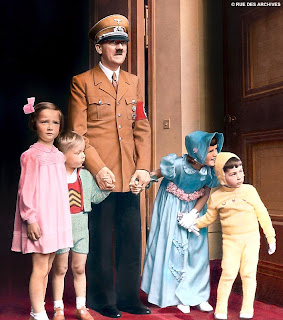 Hitler spends his 50th birthday with some children.
Posted by Katie Aaberg at 7:28 PM No comments: 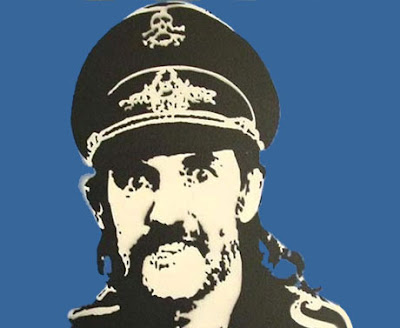 8-20-06
MOTORHEAD star LEMMY recalls silencing a German audience with a joke about the Nazis. The ACE OF SPADES rocker played a gig at the stadium in Nuremburg, where dictator ADOLF HITLER held his infamous Nazi rallies before World War Two started in 1939. And Lemmy thought it would be amusing to liven the crowd up with a cheeky reference to the past - without success. He says, "When we played in Nuremburg in the stadium where Hitler used to make his speeches, the audience were a bit slow, so I said, 'You made more f**king noise than this in 1937.' "That didn't go down well."

Lemmy has had another flap in Germany recently, but i'll save that for another post. He did have a great quote about it.
"...I'll tell you something about history. From the beginning of time, the bad guys always had the best uniforms. Napoleon, the Confederates, the Nazis. They all had killer uniforms. I mean, the SS uniform is fucking brilliant! They were the rock stars of that time. What you're gonna do? They just look good. Don't tell me, I'm a Nazi 'cause I have uniforms. In 1967 I had my first black girlfriend and a lot of more ever since then. I just don't understand racism, I never thought it was an option." ~Lemmy
Posted by SEAN at 11:01 PM 3 comments:

Get Your Teeth Into The Job 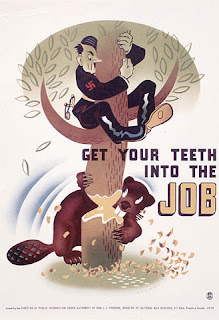 Canada's war effort. Caricature of Adolf Hitler is trapped up a tree while the Beaver symbolizing Canada gnaws it down.

I personally LOVE the slingshot in Hitler's pocket.
Posted by Katie Aaberg at 10:51 AM No comments:

Save to Beat the Devil 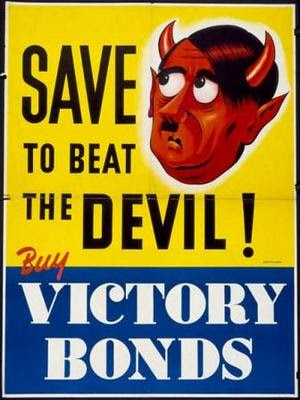 A cartoon image of Hitler as the Devil is used on this Canadian World War II poster to sell Victory Bonds.
Posted by SEAN at 10:27 AM No comments: 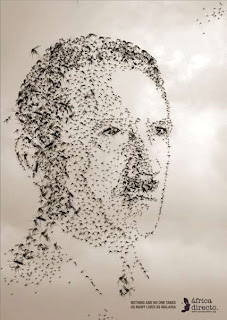 Image of Hitler made of mosquitoes from the malaria awareness campaign by África Directo. Print ads created by Spanish ad agency Sra. Rushmore.
Posted by Katie Aaberg at 10:58 AM No comments: 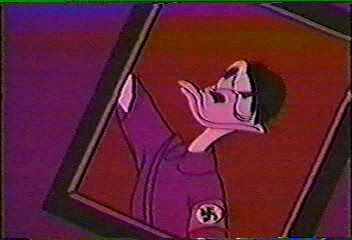 Donald Duck as Hitler, probably from Der Fuehrer's Face.
Posted by SEAN at 11:05 PM No comments: 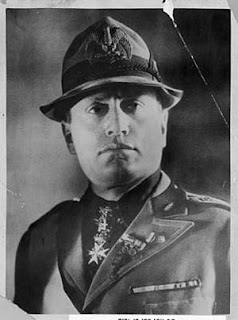 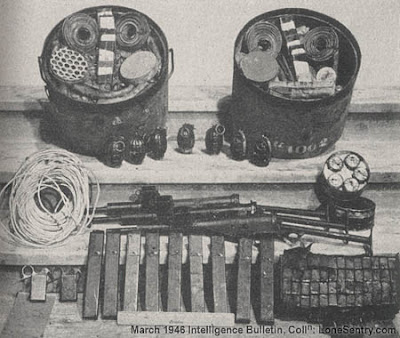 OPERATION EASTER EGG
German Plan For Sabotage Depots from the Lone Sentry read the whole thing here!
Only the overwhelming speed of the Allied drive through France foiled a German plan for extensive behind-the-lines sabotage. This "Operation Easter Egg" again illustrates the necessity for even the rearmost troops of an advancing army to remain on the alert.
In 1943 the imaginative German Intelligence Service concocted Operation Easter Egg (Ostereiaktion), an undertaking designed to establish small hidden depots of explosives and incendiaries in numerous caches strategically located in France, Holland, Belgium, and Western Germany.[1] The German Intelligence Service intended to utilize these depots to supply German agents and native traitors. The mission of these saboteurs was to disrupt Allied rear communications after a German Army withdrawal from an area, thus aiding the German forces to recapture the lost territory.
Posted by SEAN at 8:21 PM No comments: 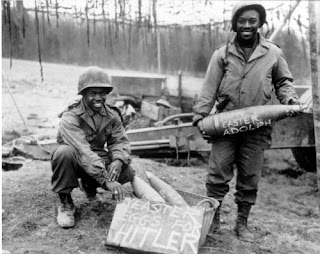 American soldiers getting ready to make a delivery to Hitler.
Posted by Katie Aaberg at 10:34 AM No comments:

Hitler in the Movies - Jubilee

I had read about Derek Jarman's "Jubilee" movie heaps of times when i was obsessed with 1977 Punk but i never found it at the video stores! Life went on & i kind of forgot about it until it was recommended by some mysterious blog which i can't recollect. It's a fantastic movie, recommended only to those who are into art movies, Punk & weirdness. Anyhow, Hitler makes a guest appearance, love his artist jacket.

"Borgia, Can i have a tank, it'd be just perfect for a saturday afternoon stroll down the King's Road, darling." ~Amyl Nitrate
I found this movie almost disturbingly profound.
Posted by SEAN at 9:48 AM No comments:

Email ThisBlogThis!Share to TwitterShare to FacebookShare to Pinterest
Labels: Punk

Hitler has something to say 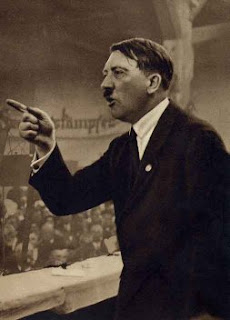 Posted by Katie Aaberg at 8:25 AM No comments:

Email ThisBlogThis!Share to TwitterShare to FacebookShare to Pinterest
Labels: Hitler


Alot is made of the occult & pagan mythos & structuring of Nazi Germany. I think this might be an attempt to make sure that Christians distance themselves from Nazi Germany, to dismiss Christian responsibility for Nazi atrocities & to demonize pagan revivalism. It certainly makes for a fun read either way! As a kid who grew up on the Lord of the Rings, Grimm's Fairy Tales & Star Wars, Northern mythology, Wagner & a very Volkisch sensibility were already burned into my brain before i knew what was going on!
Posted by SEAN at 11:42 AM No comments:

The Austrian sun is bright 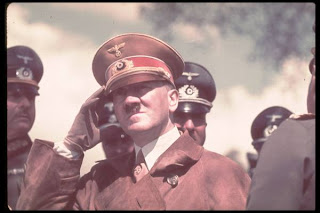 Hitler at maneuvers; St. Poelten, Austria. Photo by Hugo Jaeger for LIFE.
Posted by Katie Aaberg at 11:31 AM No comments:

Deutsch-Amerikanische Freundschaft doin' "Der Mussolini" from Alles Ist Gut (1981).
"Dance the Mussolini, move your behind, clap your hands, and now the Adolf Hitler, and now the Jesus Christ, and now the communism." (Translated from the original Chinese.
Here's an awesome DAF quote which might help those who don't understand the GOBLINKO way understand. "I don't believe in anything, so I'm free to play with anything I want. We take all that we want and play with it."
Posted by SEAN at 12:04 PM No comments:

Here is some deep internet WTF-age, but I thought it was funny.
Posted by Katie Aaberg at 9:13 PM No comments:

Email ThisBlogThis!Share to TwitterShare to FacebookShare to Pinterest
Labels: not really Hitler, Spongebob Squarepants, you tube

From the London Telegraph. 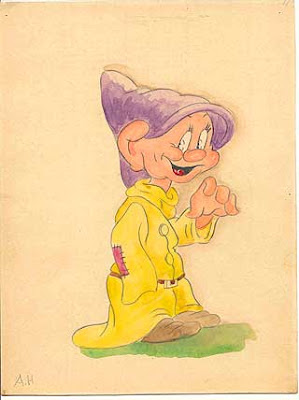 "The director of a Norwegian museum claimed yesterday to have discovered cartoons drawn by Adolf Hitler during the Second World War. William Hakvaag, the director of a war museum in northern Norway, said he found the drawings hidden in a painting signed "A. Hitler" that he bought at an auction in Germany. He found coloured cartoons of the characters Bashful and Doc from the 1937 Disney film Snow White and the Seven Dwarfs, which were signed A.H., and an unsigned sketch of Pinocchio as he appeared in the 1940 Disney film." Read the rest HERE.

Much is made of Hitler's early life as an artist. He is constantly referred to as a "failed artist" in some sort of strange attempt to show that because he failed at his true calling, he was forced to become a despotic ruler. I'm still trying to figure out what that's REALLY all about...
Posted by SEAN at 10:56 PM 2 comments:

“Lord give us strength…” 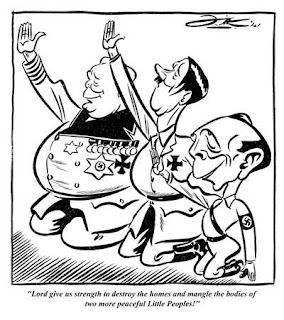 In this cartoon, Goering, Hitler and Goebbels are pictured at the time of the Nazi invasion of Yugoslavia and Greece.
Posted by Katie Aaberg at 9:37 PM 1 comment:

"Sixty years after his death, the mass-destroyer is more popular than ever.

In India he symbolizes resistance, in Egypt prosperity, in Peru discipline. The Senegalese celebrate him as a hero of anti-colonialism and the Chinese in Hong Kong as a champion of style. Presumably, Hitler is the only European who, more than half a century after his death, is still widely known around the world. Other contemporary politicians, such as Churchill or de Gaulle, are merely remembered in the respective linguistic or cultural spheres; the same goes for intellectual heroes like Göthe, Kant, Cervantes, Shakespeare."

Read more about Hitler & the total weirdness surrounding him to this day on this interesting site. The whole thing is pretty weird & fun over at the Grey Falcon.
Posted by SEAN at 10:41 PM No comments: 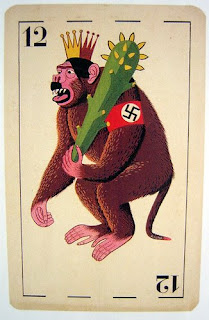 By Flickr user sindicato de la imagen. I don't speak Spanish, but he seems to be doing a series of dictator cards, they are pretty cool, go check them out!
Posted by Katie Aaberg at 10:56 AM No comments: