No High School Halloween for Hitler 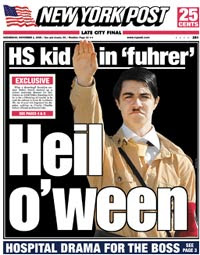 NEW YORK --A Brooklyn high school student caused a stir when he showed up for class dressed as Adolf Hitler for Halloween. Walter Petryk, 16, defended his costume Tuesday, insisting it was a satire of the Nazi dictator. But some students and officials at Leon M. Goldstein High School were not impressed. School administrators ordered the junior honors student to remove his beige coat bearing a red swastika armband or possibly face spending the day in the office, Petryk told the New York Post for Wednesday editions. Petryk refused, saying his parody was protected by his right to freedom of expression. Petryk's stepfather, Howard Bloom, who is Jewish and lost relatives during the Nazi genocide, told the Post he was initially "very disturbed" by the costume but nonetheless defended his stepson's rights. "If he had wanted to advocate my genocide, I wouldn't have allowed" the costume, Bloom said. "That wasn't the spirit in which he was doing this at all. He was doing it in the spirit of Monty Python and Mel Brooks." The city's Department of Education discipline code allows for the removal of students from class if they wear clothing that causes a disruption. In order to avoid a disruption on the way to school, Petryk disguised his Hitler getup as a costume of Charlie Chaplin, adding a bowler hat and cane.

Also, check out this cool image on the bizarre blog, "Hitler Getting Punched".
Posted by SEAN at 9:13 AM No comments: 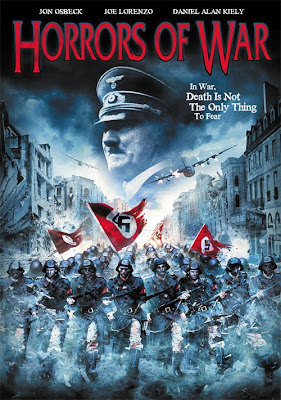 Feeling the pressure from Allied advance, Hitler unleashes his secret weapons. This film follows wayward soldiers during World War II in the European theatre as the O.S.S. sends them to investigate Hitler's arsenal of experiments. Zombies and werewolves!

movie website
Posted by Katie Aaberg at 12:24 PM No comments: Not sure if these people are connected with the Dead Snow movie or not, but either way! Nazi Zombies!
Posted by SEAN at 8:23 AM No comments:

From the hilarious Regretsy blog.
Posted by Katie Aaberg at 10:56 AM 1 comment:

Southpark - The Passion of the Jew

Cartman is dressed as Hitler in anticipation of the first Mel Gibson fan club meeting. 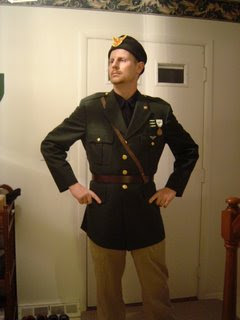 Blogger Scripturient shares how he made a nice Mussolini costume last year.
Posted by Katie Aaberg at 11:30 AM 1 comment: 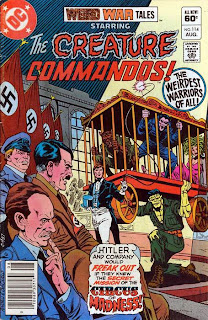 Email ThisBlogThis!Share to TwitterShare to FacebookShare to Pinterest
Labels: Adolf Hitler, comics, hitler in the comics

Email ThisBlogThis!Share to TwitterShare to FacebookShare to Pinterest
Labels: cartoons

In Germany, This Is Illegal

From the Seatlle Pi by Regina Hackett 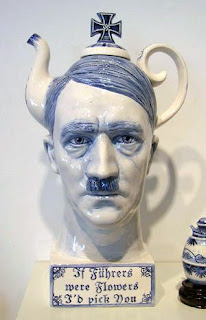 Several years ago at the Nationalgalerie Berlin, I noticed Soviet Union kitsch on sale in a street wagon nearby. Besides perfume bottles shaped like Lenin's head, there were Stalin buttons, hammers and sickles, postcards of Uncle Joe waving, those really cool Red Army watches, surely knockoffs. Stalin's face and figure can be found in Russia and all points beyond. Hitler's image is illegal in Germany and frowned on elsewhere. What's the difference? Stalin didn't lose. The official story is, he died in bed. While his face is no longer found on everything Russian and roads are said to be lined under the concrete with his smashed statues, it's OK to offer him the old tip of the hat. Mao, too. Of the 20th century's three most malign mass murderers, Hitler's is the only one his own country's government sees fit to ban, including his image, writing, party and point of view. The rest of the world agrees. A Mumbai, India-based home furnishing company recently produced a line of bedspreads accented by swastikas. The reaction in India was swift and strong enough to force a withdrawal. Had the bedsheets featured hammers and sickles, they'd still be on sale. Enter Seattle's Charles Krafft. Like a heat-seeking missile, he finds the hot spot and makes it hotter. At the teapot's base is a pseudo-homey legend in Delftware script, "If Führers were Flowers I'd pick You." The ambiguity offends. On one hand, to pick a flower is to kill it. On the other hand, the metaphor isn't enough. Flowers are picked to be shown off and admired. With the color blue coursing down the crevices of Hitler's ruined face, he's a landmine in the domestic sphere. Krafft undermines the teapot world through imagery and exposes cozy moments for what they are, attempts to forget. Only Hitler has this edge, and only Krafft wants to play with it. Here's his MySpace page, his Web site and some excellent pics of his work from Jamie O'Shea.
Posted by SEAN at 12:59 PM No comments:

Hitler with a little girl 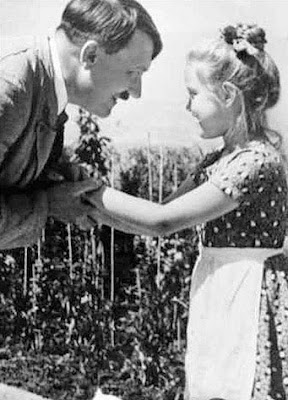 Posted by Katie Aaberg at 12:56 PM No comments:

Secret Swastika: You can type a 卐

Hey, did you know that you can type swastikas? I'm not sure what the keystroke control shift alt delete combination is but now you can cut & paste & worship the Buddha. 卐

Start your own Korean bar!
Posted by SEAN at 1:07 PM 4 comments:

Sean tells me this is old news, but I just found out about it, so here you go:

"The provocative commercial, which ends with the tag-line "AIDS is a mass murder", aims to scare young people into using condoms by associating the deadly disease with the German dictator."

campaign website
Posted by Katie Aaberg at 9:56 PM No comments:

Email ThisBlogThis!Share to TwitterShare to FacebookShare to Pinterest
Labels: advertising, health, hitler in the news, not really Hitler, PSAs, video 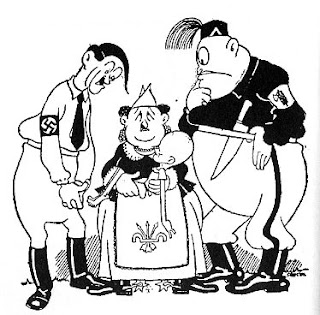 Chess set seen for sale in a shop in Istanbul. According to the shopkeeper, most of the people who purchase this set are German.
Posted by Katie Aaberg at 6:52 PM No comments: 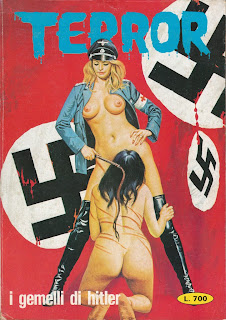 Hitler reads a paper in prison 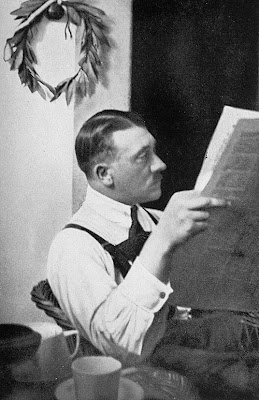 Hitler's attempt to overthrow the government in November 1923, the so-called Beer Hall Putsch, led German authorities to try (unsuccessfully) to deport the Nazi leader to his native Austria. Hitler (pictured here reading a newspaper in his cell in Landsberg prison) served only a short sentence for high treason; after his release he was prohibited from speaking at public gatherings in Bavaria until 1927.
Posted by Katie Aaberg at 11:59 AM No comments:


"The Springman and the SS (1945, Pérák a SS in Czech). Completed by Jiri Trnka, after the Nazi occupation of Czechoslovakia, the film opens in downtown Prague as a parade of SS soldiers march the streets, holding the Nazi flag, and singing a German nationalist hymn. As they walk by, a Machiavellian Nazi official reports suspicious behavior in everyday Czechoslovak life. He summons his SS men and they go through the town arresting anyone who seems even the least bit suspicious. They arrest a canary who chirps "Yankee Doodle", a cat imitating the SS march, and an old man who is Cossack dancing but slipping on banana peels. They move on to a tool stand that features a hammer, pliers, and a sickle. Obviously, the SS chief puts both the hammer and sickle together, believing that it's the symbol of the Soviet Union."
Posted by SEAN at 7:00 AM No comments:

They don't want me to use their images, so please click the link to see the ADOLF HITLER KALENDER 1937
Posted by Katie Aaberg at 12:21 PM No comments:

"A strange film entitled Nimbus Libéré (1943). Produced by Nazi Germany for occupied Vichy France, the opening credits of Libéré credit the film to a comic artist named Cal. It opens on what appears to be a peaceful evening in Nazi-occupied France. A man is at home listening to the radio with his family to discover that France will be liberated (the radio message is read by an overtly offensive caricature of a Jewish man from London). Meanwhile, the United States - represented by such familiar faces as Goofy, Felix the Cat, Mickey Mouse, Popeye, and Donald Duck - fly over and bomb the France they are supposedly "liberating." The film ends on a morbid note after the man's house is bombed. The radio continues to speak as the angel of death flies over to turn it off and laughs manically."
Posted by SEAN at 7:35 PM 1 comment: 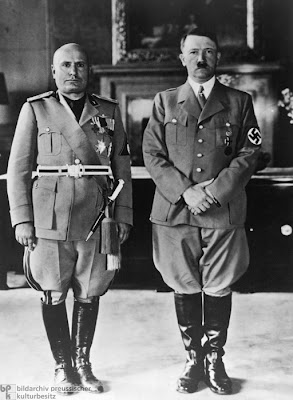 Adolf Hitler on a State Visit to Benito Mussolini in Rome (1938)
Posted by Katie Aaberg at 11:41 AM No comments: 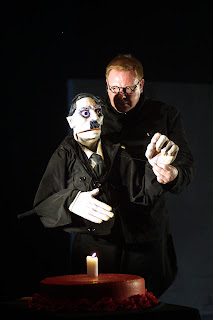 Neville Tranter with his Hitler puppet. In 1978 Neville Tranter came with his Stuffed Puppet Theatre to the Festival of Fools (street theatre) in Amsterdam and never left.
He developed his typical style of visual theatre with human size puppets. Neville Tranter is the only person on stage. Neville Tranter is the founder, the artistic force and the only constant factor in all those years of Stuffed Puppet Theatre. He is Stuffed Puppet. In his own brutal, ruthless but poetic way, he confronts the audience with their fears and dreams, urges and desires, personified by what are often life size talking puppets. Combining a minimal decor with sophisticated music,lighting and sound, using the oldest devices of the theatre as well as state of the art technology, Neville Tranter is capable of evoking images that the audience will not forget for a long time.
Posted by SEAN at 8:07 PM 1 comment:

Where is Hitler's Gold? 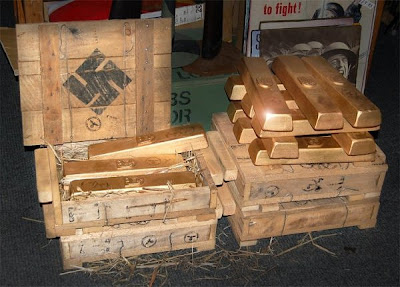 No conclusion reached, but some interesting theories in this article:
Hitler’s Gold: Uncovering the Biggest Bank Heist in History.
Posted by Katie Aaberg at 2:56 PM No comments:

Email ThisBlogThis!Share to TwitterShare to FacebookShare to Pinterest
Labels: Hitler's gold, money, theories, where in the world?

Fool the Axis - Use Prophylaxis! 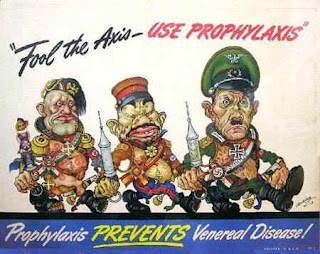 Prophylactics advert from that cartoonist dude man.
Posted by SEAN at 10:02 AM No comments:

Email ThisBlogThis!Share to TwitterShare to FacebookShare to Pinterest
Labels: advertising 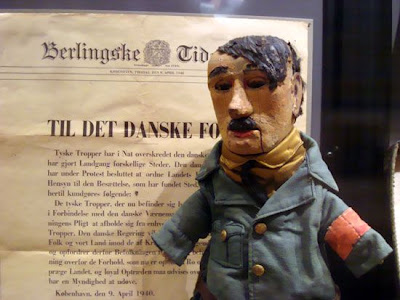 Another Hitler puppet for a Punch & Judy show. From the Danish History Museum in Copenhagen.
Posted by Katie Aaberg at 10:46 AM No comments:

After Mein Kampf, 1961
"The real uncensored film of Hitler's Hell" 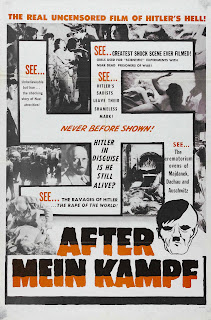 Email ThisBlogThis!Share to TwitterShare to FacebookShare to Pinterest
Labels: Hitler in the Movies, Mein Kampf

As revealed earlier in the blog, Michael Jackson is no Hitler, but it's pretty obvious that he was thinking about Der Fuhrer at least a little. Jackson said this to his Rabbi friend, "Hitler was a genius orator. To make that many people turn and change and hate, he had to be a showman and he was."
Pretending to not know about the King of Pop's interest in little boys, the Rabbi said, "You believe that if you had an hour with Hitler you could somehow touch something inside of him?” The late singer replies: "Absolutely. I know I could. You have to help them, give them therapy, teach them that somewhere, something in their life went wrong."
Posted by SEAN at 6:36 AM No comments: 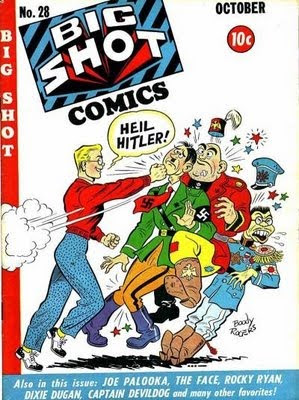 Found on the great Hitler Getting Punched blog.
Posted by Katie Aaberg at 8:26 PM No comments: 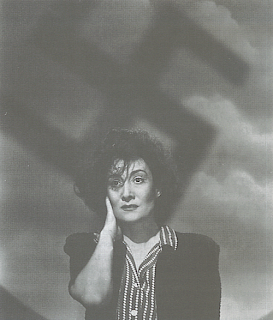 This is from some movie, but i can't figure out what movie it's from. Love the image though, i imagine this is the way most Americans are these days, haunted by this giant smoky swastika that is always behind their backs.
Posted by SEAN at 3:16 PM No comments: 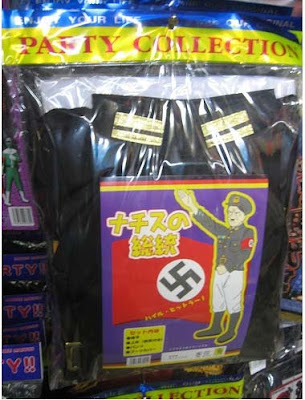 Happy October! Are you ready for Halloween? Here's a crappy Hitler costume, which can be found on the shelves of party stores across Japan, according to this great roundup of the Hitler-themed restaurants of Asia.
Posted by Katie Aaberg at 12:24 PM 5 comments:

From "The View from Taiwan" blog. Great piece with lots of fun images & stories. 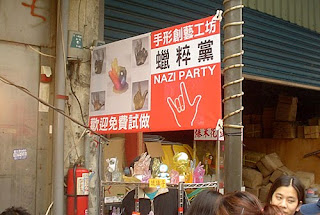 "My country's sick of me,
I'll go to Germany,
to be a spy.
I'll eat their sauerkraut,
until my eyes pop out,
and then I'll scream and shout:
"Hotsie totsie I'm a Nazi!" -- Children's ditty, last line shouted out, sung to the tune of "God save the Queen/My Country Tis of Thee"
Posted by SEAN at 6:04 AM No comments: