John Galliano has spent more than five hours at a French police station being questioned about an alleged drunken rant in a Paris bar, in which he was said to have hurled racist and antisemitic abuse. His future as creative director of Christian Dior looked increasingly doubtful as video footage emerged of an apparently separate incident in which he is seen saying: "I love Hitler". Galliano, 50, wearing a large-brimmed black hat over his trademark bandana, arrived at the police station in the central 3rd arrondissement of Paris where he came face to face with the couple he is accused of accosting at La Perle bar in the chic Marais district last Thursday. The couple, a Jewish woman and her Asian boyfriend, told French radio Europe 1 the British designer had told them: "Dirty Jewish face, you should be dead" and "fucking Asian bastard, I will kill you". After last week's incident Galliano's lawyer, Stéphane Zerbib, said the designer was lodging a police complaint against the couple for "defamation, insults, threats and aggression". "This man and woman were aggressive to Galliano, mocking the way he looked. My client was insulted first and never made antisemitic remarks." The designer has denied making racist or antisemitic comments. A second woman came forward at the weekend claiming a separate incident took place in the same bar in October. A police source told Le Parisien the 48-year-old was at first "surprised by John Galliano's attitude and the fact he had a go at her apparently without any reason". "She said the designer was in a drunken state. She is sure about the nature of the insults because she speaks and understands English well," the source added. The woman told officers that at the time she had not complained to police because she blamed the outburst on the fact the designer had been drinking. Video footage posted on the Sun's website shows Galliano apparently arguing with two women in La Perle. A woman can be heard asking the designer: "Are you blond with blue eyes?" He replies: "No, but I love Hitler and people like you would be dead. Your mothers, your forefathers would all be fucking gassed." Neither of the women is Jewish. Zerbib said he "questioned the opportunism" of the new complaint. "When you are a victim of antisemitic or racist remarks, you do not wait four months (to lodge a complaint)," he told Reuters. "What matters isn't what's on the internet, what matters is the testimony and the hearing," he added. Galliano is due to present his autumn-winter collection for Dior this Friday and his own collection on Sunday. The haute couture fashion house, which has suspended the designer, has not said whether the show will go ahead. It stressed it has a "zero-tolerance" policy towards any racist or antisemitic behaviour. Muriel Piaser, head of Paris's biannual fashion trade show, said Dior was in a difficult position: "I think the situation is not tenable for Dior," she said "Dior sells everywhere around the world. Fashion sells dreams but it also involves respecting certain ethical codes." The flamboyant Galliano, 50, the Gibraltar-born son of a British plumber and a Spanish mother, has lived in Paris for 20 years. With his trademark moustache and ostentatious outfits he is a familiar figure in the Marais, the traditional Jewish area of Paris, now home to fashionable bars and a large gay community.
Posted by SEAN at 5:33 PM No comments: 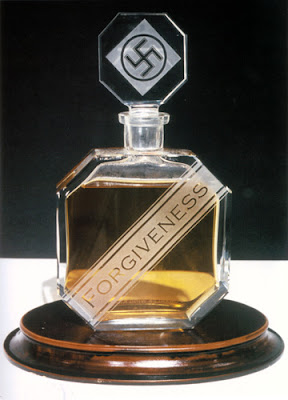 Artist: Charles Krafft.
Title: ForgivenessTM Perfume Bottle.
Year: 2001.
Etched Czech crystal.
Collection of the artist – inquiries welcome.
Glad to see that the UNPOP ART website is back in action. That's where I pulled this wonderful piece by Charles Krafft from. In addition, Charles Krafft interview to be published in the first issue of GOBLINKO's new magazine PORK coming this March!
Posted by SEAN at 6:56 AM 1 comment: Looking for the Buddhist temple? Just follow the swastika. The USA has a Jewish population of 5,275,000 in a country of 296,410,404 according to the Jewish Virtual Library. This makes the Jewish population at about 6%. I figure that these people will be the most difficult to convince that they swastika is not evil, however, as a propaganda enemy, the NAZIs have been blown out of proportion in the public mind, so that they are not just a historical enemy, but the pure embodiment of evil on earth. I have decided that the swastika is a purely benevolent symbol & its negation in the west is actually an act of occult warfare against good. Genocide is already illegal, it is illegal to beat people up in the streets, it is illegal to discriminate against others based on their race, religion & all that stuff, so society already is set up to protect people from what they think that the swastika represents.
Posted by SEAN at 6:44 AM No comments: Our favorite brand of ramen.

In Buddhism the Swastika is a symbol of the Buddha, when used in other contexts in a Buddhist Country the Swastika represents either of or relating to Buddhism and/or something that is conducive to Buddhist Morals, such as when seen on this Ramen package, it means that it is all Vegetarian, in accordance with Ahimsa, the practice of "doing No Harm to Animals and others" and thereby to not accumulate the negative Karma that is gained by doing such evil acts as killing for food.
Posted by SEAN at 6:35 AM No comments: Just so you know, another goal of the Daily Hitler, outside of exploring Hitler & the NAZIs are pop culture characters, is the liberation of the swastika. Yes it is instantly recognizable to Westerners as the NAZI symbol, however, the NAZIs are a small blip on the historical map compared to the swastika's use in religions like Hiduism, Buddhism & Jainism & as a symbol of luck & good fortune in pretty much every culture. Even as the NAZIs used the swastika, it didn't stand for "hate" or "evil", it stood for the idea that the Aryans came from India & were thus represented by this very Indian symbol, which they decided was the symbol of the German race.

You're No Hitler Hosni Mubarak!!! 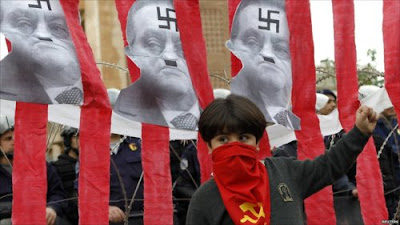 A young protester chants slogans in front of a banner with images of Egypt’s Hosni Mubarak during a sit-in organised by hundreds of Lebanese activists in front of the Egyptian embassy in Beirut, 29 January 2011
Posted by SEAN at 10:38 AM No comments:

Email ThisBlogThis!Share to TwitterShare to FacebookShare to Pinterest
Labels: egypt, You're No Hitler

Carlsberg is a Danish beer, started in 1847. 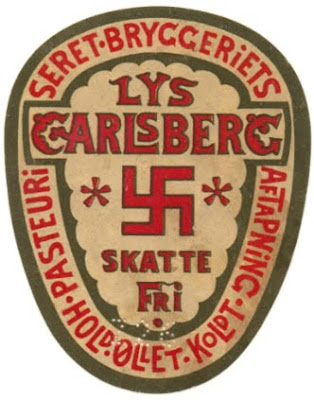 Here's from Carlsberg's website about the use of the swastika in their marketing.
"When JC and Carl Jacobsen agreed to name their breweries Old Carlsberg and New Carlsberg respectively, they also decided to use a different label design for their beer brands. – JC was using the 12-pointed star and Carl Jacobsen who was fascinated by the Antiquity chose the swastika with four dots as his trade mark. The swastika is a symbol of prosperity and good fortune and widely spread throughout the ancient and modern world. The symbol was in use until World War II."
One of my personal missions is to allow for the swastika to exist in the Western public mind as the "lucky pinwheel" again. I seem to remember my dad drinking Carlsberg elephant beer when I was a kid.
Posted by SEAN at 6:19 AM No comments: 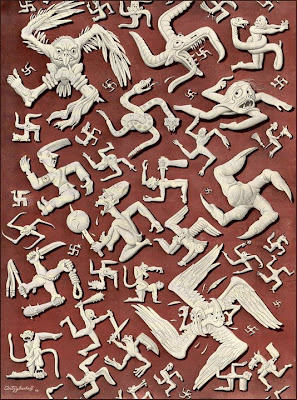 Great piece by Boris Artzybasheff! Always love his work. Thanks to Marc Time for this one!
Posted by SEAN at 9:13 AM No comments:


Thanks to Lane Kagay for discovering Tonetta for me. Wow.
Posted by SEAN at 6:04 AM No comments: 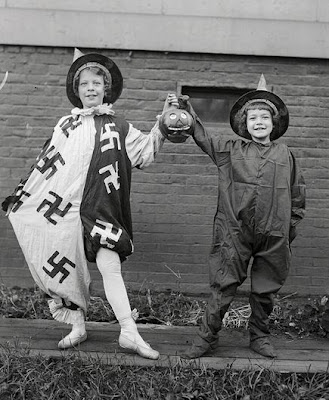 Thanks to Amelia for this one.
Posted by SEAN at 8:42 AM No comments:

Get to know this great piece of Punk Rock at the excellent Killed By Death blog!
Posted by SEAN at 9:25 AM No comments: